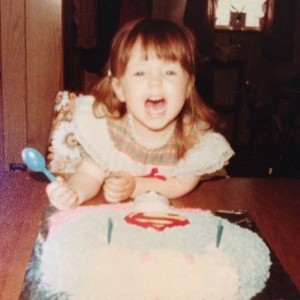 My second birthday with my Superman cake.

A large percentage of the world calls me Amanda. A slightly smaller percentage leaves the “uh” sound off and calls me Manda (which I prefer). And thank God no one calls me Mandy. My mom was originally going to name me Lacy Lanette but the nurse handed me to her and proclaimed “Here’s your little Amanda Sue!” To which my mom refused delivery and stated “That’s not my daughter!” Seems that my dad decided to name me Amanda Sue when he first saw me without consulting my mom. He said I looked like an Amanda. That name was never brought up in their discussions of baby names and to this day my mom will go off on a rant about it if asked. Turns out my Dad named me Amanda after Amanda Blake who played Miss Kitty on the TV show Gunsmoke.

I am clumsy, goofy, sarcastic, geeky, maybe a little more mentally unstable then I should be and definitely stubborn.

I am a female. Not surprisingly, I have always been a female and generally like the idea of being a girl and do not plan on changing this at any point. I do, however, have a male counterpart named Mike. It surprises some people when they find out that Mike and I have known each other since I was 5 and he was 6. We ruffled more then a few feathers when we began dating in high school (January 1996). We tied the knot, took the plunge, walked down the aisle on December 8, 2001.

We have daughter, Raven, who is currently living in Las Vegas. She is a talented artist who is currently working on several projects, including a comic series. Check out her art at https://linktr.ee/tacrow!